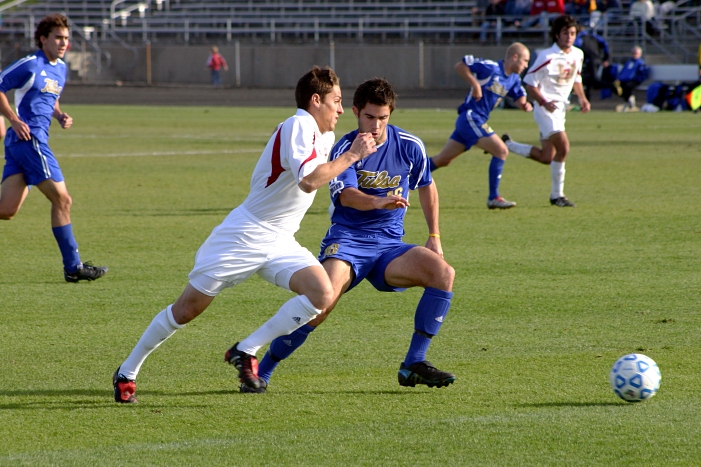 Choosing the best “formation” to suit the players

Often as coaches, one of the first questions you can be asked when meeting other coaches can be; “what formation do you use?” which is a question without any definitive answer for coaches who have a strong understanding of creating a style of play and system suited to the players they have.

Usually, I have no set answer; I have things I prefer in my teams – as most people will do – I like to play a fast, aggressive, relatively direct style. I like to create lots of scoring chances, I like to cause the opposition to panic when they have the ball after winning it from us, so I like to win the ball back quickly, I like players to feel like they are in control of the game.

This would probably lead to saying “3-4-3” as it fits all of the things that I like.

In reality, it depends on the players you have available. You might have 2 physical strikers who aren’t able to play wide, players who aren’t particularly great in possession in relation to the speed of the game and the level of the opponents, and a lack of pace in the team. This might lead you t consider that coaching a fluid 3-4-3 will be pretty difficult.

At Real Madrid and Chelsea, He successfully used a fast, counter attacking 4-2-3-1 which had enough flexibility to be dangerous in longer possession phases with a higher full back, a winger who is the 1st reference point in the final 3rd, a physically strong CF, a holding midfielder who protects the CBs and a number 10 to link play.

At Manchester United, Mourinho has a few real problem to fix, they have 3 true #10s; Henrik Mkhitaryan, Juan Mata and Wayne Rooney.

They also have the Paul Pogba problem – where to find a place where he can best show his talents in a system which gives him enough freedom, but forces him to offer additional defensive responsibility to maintain the balance of the team.

They also have 2 of the most exciting young wide forward players in Europe; Antony Martial and Marcus Rashford, who need minutes to be able to realise their huge potential. Memphis Depay has fallen out of favour and needs a move in January to be able to have an opportunity to reach the top level, something which sitting on the bench in a huge club wont allow him to do.

So, how can Mourinho fix the dilemma he has? Play his favoured 4-2-3-1, or adapt his system slightly? 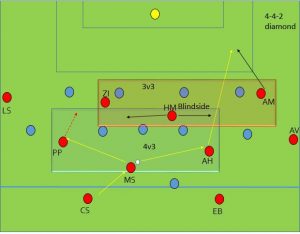 Ibrahimovic likes to have fast players around him as he drops off to link play; Martial can break to the right side while Pogba supports on the left. Mkhitaryan will support centrally to occupy multiple players while supporting Ibrahimovic centrally. Morgan Schniederlin is an underrated player and can add defensive stability to allow Pogba to be free in his position with Herrera balancing the team on the right side, supporting Valencia on the inside.

This could look like Mourinho’s solid 4-4-1-1 when defending, with Pogba and Martial on the outside, resulting in having the ability to break wide on the counter attack with pace. 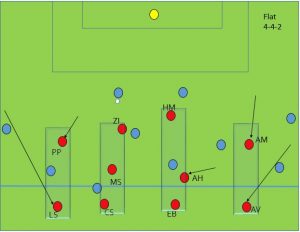 This would leave Herrera and Schneiderlin protecting the back 4 while in transition moments. 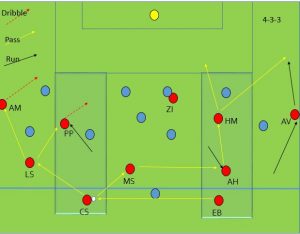 Henrik Mkhitaryan showed last season at Borussia Dortmund that as a wide player drifting inside between the lines, that he is one of the most creative passers in Europe. Clearly, Borussia Dortmund had a defined system and players understood the runs they had to make to create scoring chances so the insight to know what to do ahead of time was there.

With Martial making runs behind the defence akin to Marco Reus, and Paul Pogba having the freedom to play in the left channel, there is a real possibility this system would give the positional balance Jose Mourinho wants in defensive and offensive transitions. 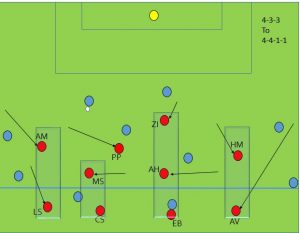 In defensive organisation, Martial would move into the left position, Mkhitaryan into the right position, with Pogba protecting the midfielders and marking the DM, assisting Ibrahimovic to block off the centre and forcing teams wide.

Next week, I will write about the effects of “Formation” in youth development and the different systems which provoke different learning objectives due to the nature of that system of play.