Finding ways to win during the match

During the course of the week, football fans will discuss their team, how they played, which formation they should use and which players should play in each position. Often this will result in different opinions from different people based on their own personal preferences.

The coach will often have these same discussions with the clubs technical staff; Assistant Manager, Opposition Analyst, Data Analyst and physical/medical staff.

After the game, the same thing will repeat itself, around 40-50 times per year depending on which club you support. These discussions are all based around a relatively simple concept: find a way to win.

Often, training may be very simple based on an opposition weakness and very simple ideas on how to exploit this part of the opponent. Opposition analysis and data analysis forms a key part of this.

An example of this may be as easy as from an opposition report with some videos to support the following statement;

‘the left back is poor 1v1 and the left winger doesn’t come back to help. The central midfielder doesn’t really offer support after a switch of play due to a lack of speed”.

“Team x has conceded x goals (% of goals) from crosses from the left side.

If we were to contrast this scenario to the opposite side with video evidence, we may see that the left center back wins many battles to clear danger from crosses, much better than the right centre back.

We could say that even if the left back was good in 1v1s, we can still draw out the main defender and attack the box from that side as the best defender of crosses is in the front post zone where if you can avoid him, there’s a good chance of creating a chance to score or from winning the loose ball inside the box to shoot quickly.

Recently, I moved to Burlington, Ontario, Canada (read it back like Michael Buffer) and have taken an interest in watching MLS, and the ‘local’ team, Toronto FC. This is a team with a few big name players in Michael Bradley, Sebastian Giovinco (the league’s best player) and Jozy Altidore.

While watching the MLS Cup Final, it was clear that Toronto were going to be in possession while Seattle would sit in defensively to counter attack. The problems TFC had were that Giovinco and Altidore were the 2 centre forwards in a 3-1-4-2 and both marked 2v1 (FB & CB). Seattles wingers often tracked back with the full backs pushing forward in a 4-1-4-1, making almost a 6-3-1 or 6-2-2 defensively.

In a match at home, on a historic occasion, TFC needed to find solutions to break down the low block of Seattle. In the images I have shown, are a typical situation when TFC are in controlled possession 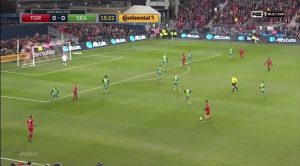 How can we find a way through? 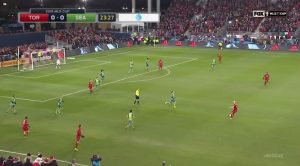 After provoking pressure, which spaces open up?

We can see here that Seattle are in a 4-1-4-1, back 4 very narrow as they are 2v1 on each CF. The DM sits infront and between the CBs, while the wide midfielders stay in the channels then move over to help press a wide pass.

This is now a problem solving scenario for the coach which may or may not have been prepared for during the week. As the FB moves to press the wide pass, this results in leaving his CB 1v1 with Giovinco. If Giovinco stays high or runs behind, he stays marked. If he drops off, what will the reaction from his marker be?

If he drops deep with him, there’s space behind for a 3rd man run as both the FB and CB are pulled forward. To find Giovinco we need stability around the ball to offer 3 types of pass;

We now need to look for which situations result as a chain reaction from him dropping deep very late as the WB receives? What happens on the other side? If we cannot break through, will the dropping off from Giovinco lead to Seattle leaving spaces anywhere else.

We already know the back 4 stay narrow, and that the wide midfielder will track his runner on the outside rather than move into a better, more central and compact position, so there’s a good possibility that we can hit the other side if we cannot break through on the 2nd or 3rd pass on the near side.

Horizontal from High (WB), Diagonal from deep (CM), Vertical from inside (DM).

To solve this problem, we need to have trained a wide zone positional structure to find Giovinco in the situation where his quality will be able to solve the problem by forcing the defender to make decisions he doesn’t want to make.

Below is an image that I would look to paint to the coach as part of the staff to try to make sure that on the wide pass which draws out the full back, we can then look for our best player to make the difference. 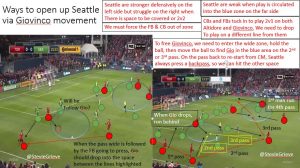 On the left side, is the current situation. We want Giovinco to drop off as the ball arrives on the wide player. This means he can play 1st time into Gio dropping off who may be able to face the CB 1v1 and attack the space around him with 3 players able to hit the box from the blindside.

We want to cause some anxiety in the CB and FB by making this movement. If the DM drops onto the defensive line, how does this help us?

In the match situation, we need to understand how to relay this information to the players to help them problem solve.

The main things we need to do are make sure that on each wide pass after going from right to left, Giovinco drops off really late. Another aspect is make sure our positional structure around that zone allows for easy circulation out of pressure to find Bradley in the centre to create penetration in the next phase.

The 2 blue zones highlighted we need to hit very late on the near side, and very early on the far side. Upon any dropping off movement, we need one of the spare players to run behind. Here, either Wing back can solve the problem by running behind, or the inside central midfielders can move in, with a 3-1 shape behind the ball offering enough protection.

How can we see this situation?

We need to look for the reaction of the opponent to a chain of 3 passes, both individually and collectively. A forward pass into the defensive line is met with intense aggressive pressing from behind with the DM closeby to press from the front 2v1. The wide pass triggers a reaction from the FB to press wide, leaving a gap inside. The back pass to the DM triggers a reaction from the CM to press leaving a gap between the lines.

Does the wide midfielder tuck in to remain compact on this pass or stay wide? He stays wide, so the space is inside; we can go diagonally. If he tucks in, we need to be quickper between the lines or the wide player needs to be on the line of the far side full back to offer a diagonal pass over the defence to put across the 6 yard lines.

With these little pieces of information, we are looking to make movements that will force rushed decision making scenarios from the opponent, and allow us to dominate the space through their pressing and eliminate their press in as many situations as possible, but be structured enough around the ball to control their counter attack. By stopping their defensive and defensive transition actions: Pressing and Counter Attacking – we can then dominate the game and have enough pressure to lead to scoring chances.

How could we train for this scenario if we know that it can potentially happen? 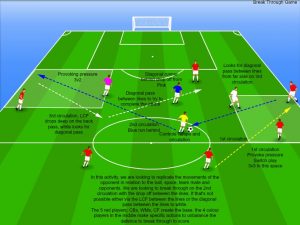 For this practice, we want to work on the positional mechanics of moving to support as the ball travels, moving the ball quickly and re-circulating. It is very important we move at game speed to ensure we cover the positions around the ball incase we need to counter press after losing possession. Timing of movements to support and get into position is critical. Once the players understand the timing of the runs, we can then add in mannequins to show roughly what will happen in the match, before we add in the opponent. This ensures we build into what we want to do, paint pictures for players to understand and know what to look for in the more dynamic environment. The white player for example, looks for the space between LCM and LM. The mannequins will represent where they are. 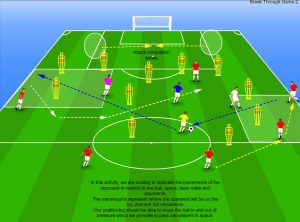 Here, we can build up from playing a pass into the white zone on the right, retain possession for 3 passes, recirculate to the yellow, switch play to the other side where we play 3v2 and try to break through on that side. If we can’t break through within 3 seconds, we re-circulate play through yellow to pass diagonally to white, who passes into the overlapping run of the WB, who passes across the goal to score.

From here, we need to now look at specific positioning and timing in relation to the opponent and space which is available, as opposed to the last activity which was about the team mate and the ball. We start to look in more detail at receiving angles, passing angles and communication with team mates when to drop, run behind, fill in space, be protection in transition if you are not an immediate option in possession phases. We look at different ways to complete the attack on the near side and far side, running angles into the box and ways to recover the loose ball from a cross and to protect against a counter attack by moving the players into position before the attack is completed. 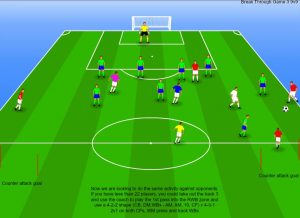 Game based training: Playing against the opponent with our strategy in place

We can now move into a game situation. Ideally you will do it with 22 players which would give exact pictures, but if you have less players, 2 of the back 3 can be removed, even 3 of them if the coach can be the near side CB and pass the ball in. We want the opponent team to play exactly how the opponent will set up based on what we know. We will then work on how we move the ball, creating the situations we feel will happen in the game. Obviously as the game is played, many problems will have to be solved by the players independently which are based on our own tactics for our style of play, but we are looking to exploit the opposition tactics by adapting our strategy to the game.